The eastern hellbender, pictured here, is the third largest salamander in the world, and is an endangered species in Indiana. The Animal Disease Diagnostic Laboratory has partnered with other Indiana veterinarians and wildlife specialists to help collect data about the hellbender’s challenges in the wild. (Photo courtesy of Rod Williams Laboratory)

Due to pollution and habitat erosion, the eastern hellbender population is on a rapid decline in the United States. While these salamanders can live up to 30 years in captivity, researchers believe that the populations of hellbenders throughout the state are so spread apart, they have not been able to even find one another to reproduce.

“It’s a sad love story,” Dr. Grant Burcham said with a laugh.  Dr. Burcham is a veterinary diagnostician at the Heeke Animal Disease Diagnostic Laboratory in Southern Indiana. His role as a pathologist includes doing post-mortem analysis on the hellbenders that pass away while they are part of a statewide hellbender repopulation project, and providing insight as to why. “The data I provide can be used in a lot of ways, from changing medical protocol for managing the salamanders while they are young, to understanding their challenges in the wild,” Dr. Burcham said.

The plight of the Hellbender salamander is a fascinating tale of survival aided by veterinary specialists collaborating with wildlife biologists.  The staff at the Animal Disease Diagnostic Laboratory’s (ADDL) Heeke Lab, located at the Southern Indiana Purdue Agricultural Center near Dubois, Ind., joined this effort as part of the ADDL’s mission to provide vital veterinary diagnostic testing to Indiana and the rest of the United States through diagnosis of diseases, discovery of new knowledge and dissemination of that knowledge for animal medicine and research.

“Because they live so long in one specific kind of environment, hellbenders serve as a kind of barometer for environmental health,” explained Dr. Burcham. “They are endangered in Indiana due to habitat loss and slipping health of water sheds all over the Midwest. They are a top predator in their ecosystem, and the loss of top predators in the wild has all kinds of negative effects on the environment, as this change usually creates enough imbalance in wildlife populations to create dire economic and ecological impacts.” 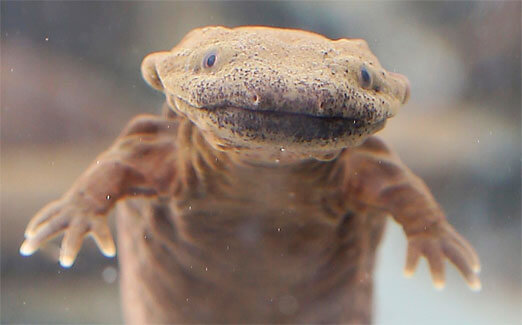 The ADDL’s Heeke Lab partnered with the Purdue Department of Forestry and Natural Resources, the Indiana Department of Natural Resources, and three Indiana zoos, to raise hellbender salamanders from eggs and return them to their southern Indiana habitat to be tracked after they were fully-grown. The Heeke-based veterinary pathologists help researchers understand reasons for disease and mortality in this endangered population. (Purdue Agricultural Communication photo/Tom Campbell)

The hellbender salamander, also known as the snot otter, lasagna lizard, devil dog, mud dog, and other colorful nicknames, is a flat-bodied species of aquatic giant salamander that lives in shallow rushing water, such as rocky streams. They live long lives, reaching sexual maturity at around four to five years old, and are the world’s third largest salamander at up to 22 inches long. Their heads are flat with beady eyes, and their bodies are covered with loose skin with many folds that is as sensitive to light as it is to water. Once populous throughout Indiana, by 1981 they were listed as endangered throughout the Midwest, threatened by changes in their environment like pollution and damming.

Due to precipitous population losses during the last several decades, the hellbender is now protected in all states throughout its range. In Indiana, there is only one remaining population in the Blue River in Washington, Harrison, and Crawford Counties.

As part of a larger conservation effort to protect the species throughout the country, the Indiana Department of Natural Resources (DNR) and Purdue University wanted to help preserve the last remaining Indiana population and hopefully restore the Hellbender to its former habitat. Dr. Nick Burgmeier, research biologist and extension wildlife specialist in the Purdue Department of Forestry and Natural Resources, coordinates on-the-ground efforts for the hellbender in southern Indiana.  He explained that protecting the Hellbender comes with several benefits. “First, we are helping prevent the extinction of an ancient species.  Second, hellbenders are high-level predators in the streams in which they are found and serve an important ecological role, and finally, protecting Hellbenders has the added effect of protecting rivers and streams that serve as recreational areas for people and as habitat for other wildlife,” Dr. Burgmeier said.

In 2015, a conservation effort run by Dr. Rod Williams, associate professor of wildlife science in the Purdue Department of Forestry and Natural Resources, partnered with three Indiana zoos and the DNR to raise hellbender salamanders from eggs and return them to their southern Indiana habitat to be tracked after they were fully-grown. The data collected from these salamanders helps scientists understand more about hellbender biology and the challenges they face in the wild.

After releasing about 80 adult salamanders into the wild in late 2017, DNR veterinarian Dr. Nancy Boedeker suggested they work with a veterinary diagnostician to help them understand why some of the salamanders didn’t survive in the wild, and how to help them. Pathologists are diagnostic experts tasked with looking at patterns of disease and mortality.  They use their diagnostic expertise to develop deeper understanding about how disease works in the body. Dr. Burcham was asked to assist with the research. The convenient location of the Heeke laboratory and Dr. Burcham’s availability proved fortuitous.

“The addition of a veterinary pathologist to the team helps fill in important gaps in our understanding of Hellbender biology disease and mortality,” said Dr. Burgmeier.  “In the past, whenever a Hellbender died, we generally just had to give a best guess as to the cause. With a pathologist on board, we can gain valuable insights into why an animal might have died. More importantly, we can hopefully apply that information to improve our husbandry and research techniques and increase survival rates.”

Mortality for young, wild salamanders can be high– up to 90% in some areas. They struggle with the decline in their natural environment, and are subject to predators when young. Raising the animals in a laboratory setting gives them a fighting chance of survival in the wild. In the case of any of the salamanders that pass away, Dr. Burcham conducts a veterinary post-mortem analysis and collects data about the hellbender’s life cycle.

To help address ongoing research needs, Dr. Boedeker and Dr. Burcham plan to mentor a student worker who will help develop a method of skeletocronology to use in estimating the age of the wild amphibians that come to the Heeke Lab for post-mortem analysis.

“This project speaks to the importance of having many kinds of veterinarians involved in animal and environmental research,” said Dr. Burcham. “The Indiana DNR veterinarian is concerned with the health of the animal population in the wider ecosystem, while clinical veterinarians at regional zoos do much of the hands-on and day-to-day health management for the young hellbenders, and the pathologists examine patterns of disease and mortality. Altogether these veterinary specialties provide a complete view of the hellbender’s life cycle and their challenges in their environment with evidence-based outcomes research.”