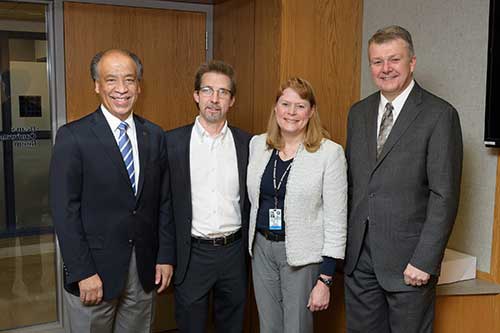 Dr. Salisbury has been recognized for developing national and international veterinary curricula and specialist training, and has been involved in every major curriculum revision in the College of Veterinary Medicine. She has won 18 college teaching awards over the span of her career including Purdue Veterinary Medicine’s Career Teaching Award, Alumni Outstanding Teaching Award and Weedon Faculty Recognition Award. She also received the national Carl J. Norden-Pfizer Distinguished Teacher Award. Dr. Salisbury is a member of Purdue’s Book of Great Teachers, a charter member of the Teaching Academy, and an Honored Mentor for the American College of Veterinary Surgeons Foundation.

Dr. Catharine Scott-Moncrieff, head of PVM’s Department of Veterinary Clinical Sciences, said of Dr. Salisbury, “Her one all-encompassing passion has been the art and science of teaching and learning.” The 150th Anniversary Professors were selected by a committee of 13 senior faculty who are distinguished and named professors, winners of the Murphy Award, and members of the Teaching Academy. “These newly named professorships bring great distinction to the faculty who have earned the title and shine a bright light on the importance of teaching at Purdue,” said Provost and Executive Vice president for Academic Affairs and Diversity Jay Akridge.

The principal criteria for selection as a 150th Anniversary Professor include:

Other considerations include mentoring and contributing to the academic, career and personal development of students within and outside the classroom, as evidenced by one or more the following:

The inaugural 150th Anniversary Professorships will be funded by the Provost’s Office until donors are found to endow these named professorships. Faculty who receive the new designation will receive an annual discretionary allocation of $25,000.