This laboratory is committed to translate laboratory discoveries to novel and effective treatments for human patients of neuronal trauma and degenerative diseases. This is realized through multidisciplinary investigations using a combination of basic biology and engineering techniques. The goal of our research is to develop new therapies that can be rapidly translated into the clinic.

Nanomedicine in neuronal trauma and diseases

Nanoparticles have become a major field of exploration for medical applications. Based on their material properties, they can help to treat disease by delivering drugs to a specific area of the body to reduce side effects, diagnose diseases by enhancing detection methods (MRI or CAT scan), or a mixture of both. Regarding treatments, the use of nanoparticles can target diseased areas in the body and therefore enhance drug bioavailability and reduce dosing frequency. We are interested in employing various natural or synthetic polymers for the purpose of diagnosis and treatments in neuronal trauma and diseases. Specifically, we are interested in an effective drug carrier that can have the capability of carrying some effective compounds developed in this lab, such as potassium channel blockers and aldehyde scavengers, to be used in spinal cord and brain injury and chronic neurodegenerative diseases.

The mechanisms of neuropathic pain in spinal cord injury.

Beyond paralysis, chronic neuropathic pain drastically impairs the quality of life for spinal cord injury (SCI) victims. Despite years of research, this type of pain remains refractory to treatment. Consequently, pain can persist for decades post-injury, and depression and suicide frequently result. Although inflammation is the major pathology of neuropathic pain in SCI, the mechanisms by which it occurs are not entirely clear, and the resulting allodynia is refractory to conventional anti-inflammatories. Growing evidence suggests that oxidative stress plays a critical role in pain. However, free radical scavengers alone have been unsuccessful at preventing the development or progression of neuropathic pain. Our lab is interested in improving our understanding of the mechanisms of oxidative stress and thereby identifying novel, more effective therapeutic targets.

Biomechanics of nerve injury in traumatic and blast injury

By integrating biological, engineering, and computational methods we are interested in developing biomechanical models of brain and spinal cord tissue to better understand the structural damage, and more importantly, capable of predicting functional loss resulting from various trauma, such as mechanical (compression, contusion) and blast injury.

Mechanical or blast injuries to the brain and spinal cord often results in tissue damage that lead to various functional loss. Effective prognosis and treatment of these types of injury is virtually non-existent because of poor understanding of the mechanisms of injury and the mechanical properties of the CNS tissues. Computational models are a valuable tool that can predict the extent of structural damage to the spinal cord and the consequent loss of nerve function. Development of an effective model requires a rigorous interdisciplinary effort that takes into account the anatomical mechanisms of injury as well as the mechanical behavior of the tissue. Engineers can characterize the tissue properties and biologists can monitor anatomical and functional changes. We have established an interdisciplinary research team working together to understand the mechanisms of various traumatic injuries and establish models that can predict the severity of tissue damage at given external load and also guild treatments.

Axonal damage is the key pathological change leading to nerve degeneration and functional loss. In particular, axonal membrane disruption resulting from mechanical insult plays pivotal roles in causing axonal degeneration and subsequent cell death. We have shown that polyethylene glycol (PEG, MW: 2,000), a hydrophilic polymer, can reconnect severed axons, repair membrane disruptions in crushed axons, and restore axonal conduction in isolated spinal cord strips. We have also shown that PEG can restore functions of injured mitochondria in both in vivo and in vitro conditions. PEG also improves behavioral outcome in rodent spinal cord and brain injury models. An ongoing investigation is aiming at revealing the mechanisms by which PEG repairs axonal membrane and mitochondria at the subcellular level. Such study is important in developing new therapeutic strategies for neural trauma based on the mechanism(s) of PEG-effect in both axolemmal and mitochondria.

Acrolein, an alpha, beta - unsaturated aldehyde, is a ubiquitous pollutant that is also produced endogenously through lipid peroxidation. This compound is hundreds of times more reactive than other aldehydes such as 4-hydroxynonenal, is produced at much higher concentrations, and persists in solution for much longer than better known free radicals. It has been implicated in disease states known to involve chronic oxidative stress. In particular, our lab is the first to provide the initial evidence to implicate acrolein in spinal cord injury and multiple sclerosis. We, and others, have also shown that acrolein may overwhelm the anti-oxidative systems of any cell by depleting glutathione reserves, preventing glutathione regeneration, and inactivating protective enzymes. On the cellular level, we have shown that acrolein exposure can cause neuronal membrane damage, mitochondrial dysfunction, and myelin disruption. Such pathologies can be exacerbated by increased concentrations or duration of exposure, and can occur in normal tissue incubated with injured spinal cord, showing that acrolein can act as a diffusive agent, spreading secondary injury. We have also provided compelling evidence that several chemical species capable of binding and inactivating acrolein can offer significant neuroprotection in neuronal trauma and diseases. Specifically, hydralazine, an FDA-approved drug for hypertension, and phenelzine, an FDA-approved antidepressant, can reduce elevated acrolein concentrations and inhibit acrolein-mediated pathologies in animal models of multiple sclerosis and spinal cord injury. Our work has suggested that acrolein scavenging is a novel effective treatment which is primed for rapid translation to the clinic. Through collaborative efforts with researchers at the Department of Neurology and Stark Neuroscience Institute at Indiana University School of Medicine, we are aiming to translate anti-acrolein therapy from a laboratory discovery to novel and effective treatments for reducing neuronal damage, potentially helping millions of multiple sclerosis and spinal cord injury patients. Concomitant investigations in the lab have also been focused on revealing the mechanisms of acrolein-mediated neuronal damage. Such study is expected to indentify key damaging factors that will inspire innovative therapies that could be synergistically applied with anti-acrolein treatment to achieve greater effect in MS and SCI patients.

Novel adhesives and scaffolds for nerve repair and regeneration

Dr. Shi has been researching the use of biological and synthetic polymer adhesives for providing mechanical strength to the recovering injured spinal cord, as well as peripheral nerves. An ideal adhesive is expected to provide synergistic benefits along with Polyethylene Glycol, to the injured spinal cord and peripheral nerves. It was found that a biological adhesive, mussel adhesive proteins (MAP) and a Rapidly Photo-Cross-Linkable Chitosan Hydrogel, can provide strength that is compatible to or better than, some known non-biological adhesives. On-going testing will combine the use of PEG, nerve membrane fusion, and bioadhesives, connective tissue fusion, to achieve optimal results in CNS and PNS nerve repair.

Recently, Dr. Shi and colleagues have also established animal models for Parkinson's disease (rat, 6-OHDA) and multiple sclerosis (mice, EAE). They have gathered a significant amount of evidence which suggests that neurodegenerative diseases and neuronal trauma may share similar mechanisms in cellular degeneration. Specifically, oxidative stress appears to be the key element in mediating cell death in all these conditions. They are currently working on revealing the molecular mechanisms of cellular damage. Effort has been taking to establish effective pharmaceutical intervention aiming to prevent, delay, or even reverse the pathology of neurotrauma and neurodegenerative diseases.

Most axons in the vertebral central nervous system are myelinated by oligodendrocytes. Myelin protects and insulates neuronal processes, enabling the fast, saltatory conduction unique to myelinated axons. It is well established that the increase of potassium channel activity is an important mechanism of conduction failure in spinal cord injury and multiple sclerosis. Suppressing aberrant potassium current by potassium channel blockade is an effective intervention for restoring signal conduction in demyelinated axons. Our lab has been involved in the original development of 4-aminopyridine, a well known potassium channel blocker that has seen recent clinical success as a treatment for multiple sclerosis symptoms. However, the narrow therapeutic range and the common side effects associated with its use limit the clinical application of 4-AP. In an effort to identify new compounds that could serve as viable alternatives to 4-AP, with stronger effects and less side effects, we have identified several new compounds posses efficacy in restoring action potential conduction in injured axons. One of these potassium channel blockers, 4-AP-3-MeOH, was more potent than 4-AP. Furthermore, the derivative-rescued axons conduct electric impulses in a manner that is more like healthy axons than under 4-AP treatment. Therefore, these new derivatives are potential alternatives to 4-AP treatment in reversing conduction block in spinal cord injury and other demyelinating diseases. At the present time, 4-AP remains under study for use with spinal cord injury patients: blocking potassium channels remains a viable strategy in restoring axonal conduction and improving overall neurological function. Further studies of potassium blockade therapies for demyelinating diseases are warranted, as 4-AP has been approved for improving ambulatory ability in multiple sclerosis patients. 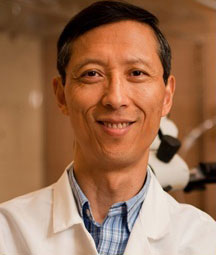