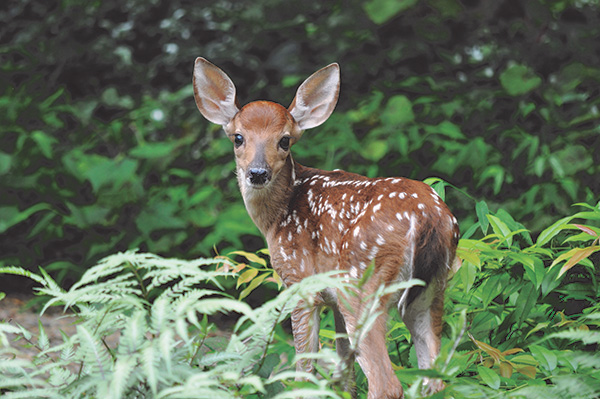 When Dr. Andrea Vanderpool (PU DVM 2004), resident in anatomic pathology at the Indiana Animal Disease Diagnostic Laboratory, received a biopsy submission of a farmed deer in Indiana, she wasn’t aware she was looking at a landmark discovery.

The deer died from chronic bacterial pneumonia, which is common, but the referring veterinarian noticed that the deer’s front and rear limbs were swollen as well. The swelling wasn’t edema, although edema would have made sense as a symptom resulting from pneumonia. In this case, it was bony thickening of all four limbs.

Hypertrophic osteopathy was the eventual diagnosis. There is no previous record of this condition being seen in a white-tailed deer. Commonly seen in dogs, and sometimes humans, hypertrophic osteopathy occurs when lesions in the lungs lead to production of new bone on the distal limbs. “There are a number of theories why this might occur,” said Dr. Vanderpool, “but why something in the chest leads to increased growth factors in the limbs is still unknown.”

There are very few known cases of hypertrophic osteopathy in other deer species, with one reported in a deer species in Europe.

“That this is even a possibility is fascinating to the veterinary community,” said Dr. Vanderpool. “It helps to know that this is an entity that exists in deer, and that we might look out for symptoms in our cases moving forward.”

Dr. Vanderpool earned her Purdue DVM degree in 2004. Following graduation, she worked in small animal private practice in Indiana and Tennessee, before returning to Purdue to begin her residency and graduate teaching assistantship in the Department of Comparative Pathobiology.