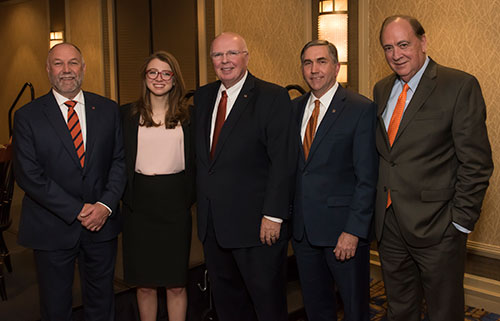 Dr. Timothy Boosinger (PU DVM ’76) is retiring as the provost and vice president for academic affairs at Auburn University. He was honored for his 35-year Auburn career at a reception held January 18 at The Hotel at Auburn University and Dixon Conference Center. During the event, Dr. Boosinger was named provost emeritus and professor emeritus.

Dr. Boosinger was appointed provost in 2012 after serving as interim provost for a year. Working with the university’s stakeholders, he is credited as implementing multiple programs and initiatives that have strengthened the institution’s capacities and advanced its land-grant mission.

A 1976 Purdue DVM graduate, Dr. Boosinger earned his doctorate in pathology at Purdue in 1983, the same year he joined the Auburn University College of Veterinary Medicine faculty as an assistant professor of pathobiology. In 1993, he was named associate dean for academic affairs and two years later became dean of the college. He served in that role until 2011, and articulated a strategic vision for the college to become a top tier veterinary school in the country.