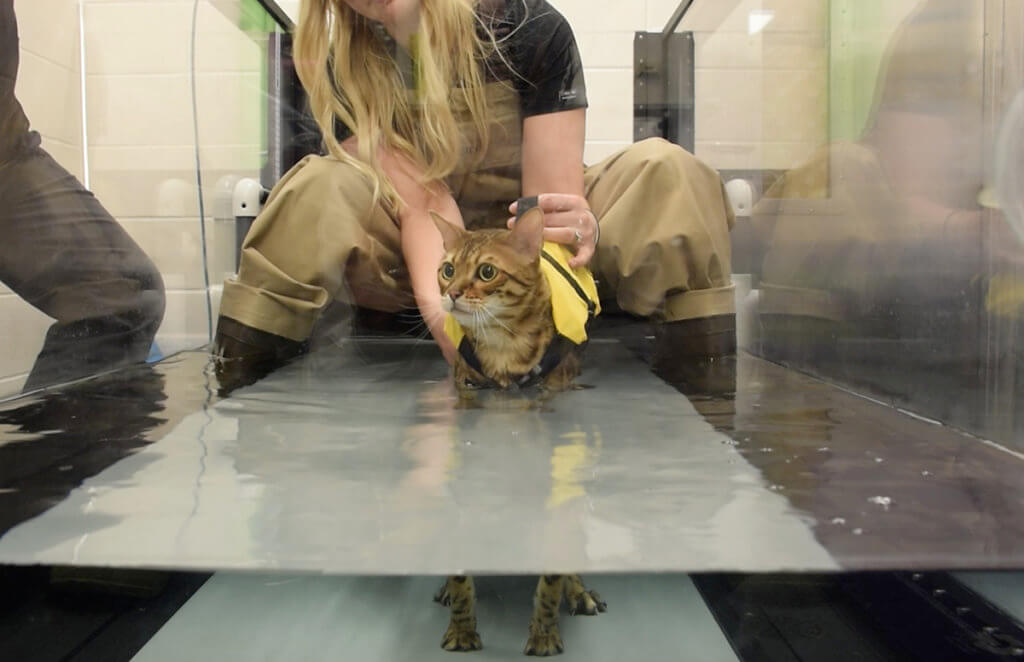 Fridgey, a two-year-old Bengal cat, uses the aquatic treadmill as part of his rehabilitation program after undergoing a full hip replacement at the Veterinary Teaching Hospital. (Purdue University photo)

As busy as it is beautiful, the Bengal cat is an energetic domestic breed that tends to have a lot in common with its cousins in the wild – high jumping, climbing and even a love for water. So, imagine the pain and disappointment when Fridgey, a two-year-old Bengal cat, started to have problems with his hips.

When Fridgey later began to have issues on his right side, his owner, Tyler Goldsberry of Schererville, Ind., again brought him to the Veterinary Teaching Hospital.  This time, the surgery team led by Dr. Mark Rochat, clinical professor of small animal orthopedic surgery, and Dr. Sarah Malek, assistant professor of small animal orthopedic surgery, proceeded to perform a procedure commonly used in human medicine, but never before used on a feline patient at Purdue – total hip replacement surgery.

“The technology has been around for years; it’s just that the availability of the systems and training for the people performing the procedures weren’t as commonplace in the past,” Dr. Malek said. “Now it’s much more commercially available and technically feasible.”

Dr. Malek said the first human hip replacement actually was inspired by a procedure originally performed in dogs, and it has taken some time for the process to work its way from people back to small animals.  She also explained that total hip replacement surgery better addresses quality of life issues than the FHO procedure, which has been done for decades in dogs and cats to treat hip dysplasia, severe fractures, and arthritis.

Fridgey’s successful hip-replacement surgery was performed in March 2018, and while he’s not yet ready to take any giant leaps, he’s resting and continuing with physical therapy sessions, which he began with the hospital’s physical rehabilitation service immediately after surgery.

Just like human patients, animals benefit from physical therapy to increase their endurance and stamina following a surgical procedure.  “For people, physical therapy isn’t something that’s ‘recommended’ after a procedure; it’s required,” said Jessica Bowditch, RVT, CCRP, rehabilitation and neurology technician at the Veterinary Teaching Hospital. “I think it’s great that animals are now getting that same quality of care.”

Technicians in the rehabilitation service set up physical therapy schedules with the pet owners, then use everything from an aquatic treadmill to balance boards, wheeled carts and a slalom course of orange cones to help a wide array of animal patients regain full strength and range of motion.

“We’ve been able to get a goat and a 4-H calf walking again.  We’ve also helped rabbits, tons of dogs, and of course, a few cats,” said Jessica. “We’re up for doing rehab on any sort of animal.”

Click here to a view a Purdue NOW video of Fridgey with his treatment team as he undergoes physical therapy post-surgery at the Veterinary Teaching Hospital.