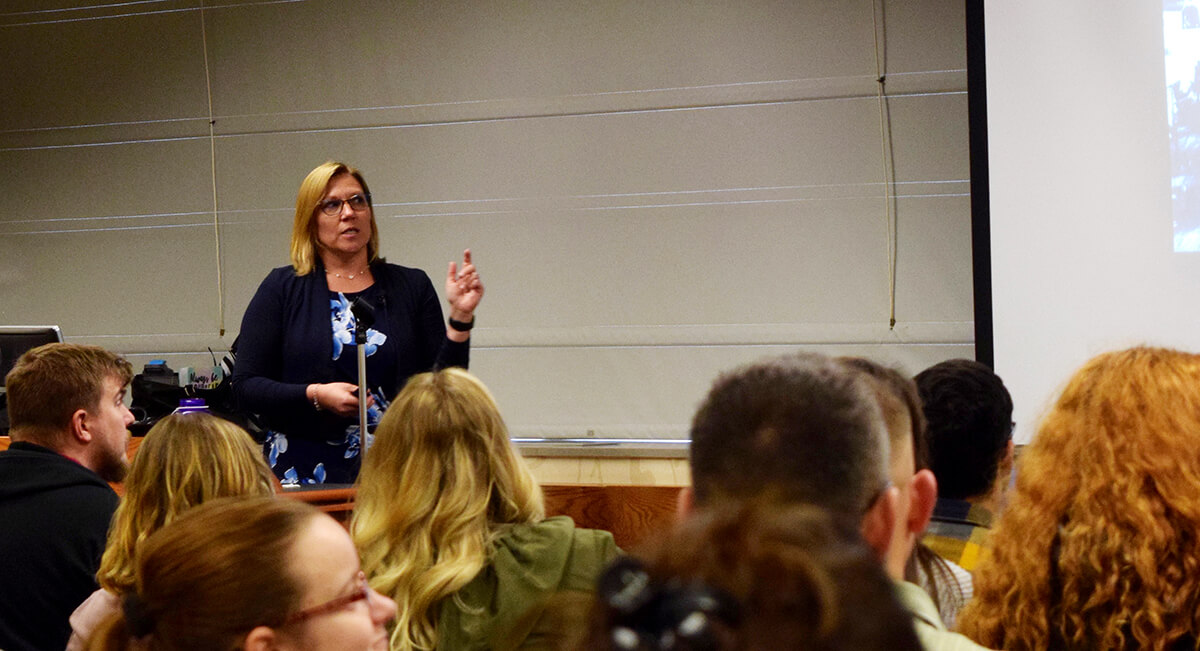 Now in its fifth year, Dawn or Doom is a major two-day event designed to foster conversations about potential risks and rewards of rapidly emerging technologies, such as artificial intelligence and genetic engineering.  Held on Purdue University’s West Lafayette campus, the event attracts upwards of 6,000 people, including leading national experts and top Purdue researchers.  This year, Dr. Audrey Ruple, assistant professor of one health epidemiology in the Department of Comparative Pathobiology became the first Purdue Veterinary Medicine faculty member to speak at the event.

Dr. Ruple addressed the topic of emerging zoonotic viruses and related technology issues at her session entitled, “Chikungunya, West Nile, and Zika, Oh My!”  She began her presentation by giving the audience some background about pandemic diseases in history, focusing on the 1918 epidemic of influenza. Then she cautioned about the potential for a future pandemic that could catch the world unprepared, and shocked the audience with the prediction that the next pandemic could take 400 million people, if it occurred at the same levels as historical examples. She said it’s predictable that the next pandemic will be caused by a zoonotic disease (a disease transmissible from animals to humans) of a viral origin.

Dr. Ruple explained that several factors are leading to increases in the geographic spread of zoonotic viruses, including climate change, land use impact, and globalization. She said climate change results in vector species such as mosquitos and ticks arriving in new locations that they have never inhabited before, bringing them in contact with naive human populations. Land use impact is pushing the human population into close contact with previously wild areas, and increasing the likelihood of disease spreading from wildlife to humans. Lastly, Dr. Ruple stated that globalization spreads these diseases quicker than ever, as modern transportation decreases travel times, and infected individuals can travel across the world before realizing they are ill.

Dr. Ruple also talked about the similarities of diseases like Zika, West Nile, and chikungunya, which have spread across the world in what she described as a first wave of pandemic disease, characterized by less-severe symptoms in those who are infected.  She explained that experts are more worried about a second wave of disease spread that could have much greater impact on human health.  She said various groups and agencies across the world are monitoring the spread of these diseases in hopes of preventing a second wave or minimizing the human losses if one does occur.

Dr. Ruple then pitched the idea of using existing wearable technology to track the spread of disease. She said such a second wave of one of these diseases could be identified by monitoring health through smart watches and fitness trackers to detect when individuals are experiencing symptoms. This approach would provide a means for alerting individuals and public health agencies of unusual health reports and possible disease outbreaks. This kind of wearable technology is already used in devices like Fitbits, and fitness watches created by Apple and Samsung. In addition to monitoring heart rate and body temperature, such wearable technology tracks user location, which could be utilized to track the spread of disease.

Dr. Ruple sees this wearable technology as a vital means of reducing the impact of zoonotic diseases in the future. Dr. Ruple said the key is to be able to perceive this issue through the lens of One Health, which involves the concept of a worldwide strategy for expanding interdisciplinary collaborations and communications in all aspects of health care for humans, animals and the environment.