Bittersweet is the word that characterized the sentiment at a reception held in honor of Dr. Lynetta Freeman on the occasion of her retirement at the end of 2018 as professor of small animal surgery in the Department of Veterinary Clinical Sciences (VCS).  The reception in the Continuum Café December 14 attracted a crowd of faculty, staff, students, friends, and family.

Dr. Freeman was hailed as a pioneering veterinarian who made a significant impact on the College of Veterinary Medicine and the Department of Veterinary Clinical Sciences both as an innovative specialist in small animal surgery and as an educator committed to improving opportunities for students to gain surgical expertise and experience.  She was introduced at the reception by VCS Department Head Catharine Scott-Moncrieff who described her background and accomplishments. 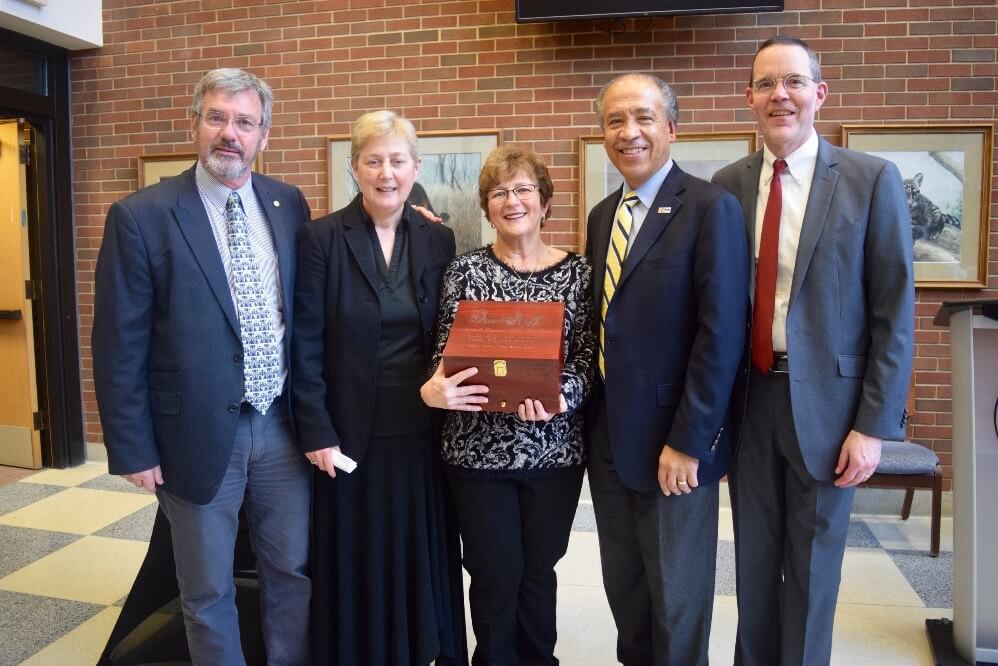 Dr. Freeman earned her DVM degree at Oklahoma State University in 1981 and went on to complete an internship at Colorado State University before spending a year in small animal practice in Oklahoma City.   She then went to Washington State University where she completed a small animal surgery residency before joining the veterinary faculty at Mississippi State University as assistant professor of small animal surgery.  In 1989, she went into private industry, accepting a position as a senior scientist at Ethicon.  Two years later she became board certified by the American College of Veterinary Surgeons (ACVS).  By 2000, Dr. Freeman had risen to the position of director of Ethicon’s Bariatric Surgery Innovation Team.  She was extensively involved in developing medical devices to perform minimally invasive surgical procedures at Ethicon and is a named inventor on 23 patents.

In the midst of all this success, Dr. Freeman chose to make a major career change and came back to academia in 2006 when she joined the Purdue faculty, accepting a joint appointment in the College of Veterinary Medicine’s Department of Veterinary Clinical Sciences and the Weldon School of Biomedical Engineering.  Since then Dr. Freeman has been productive and influential in scientific discovery, engagement, and teaching.

Dr. Scott-Moncrieff also pointed out how Dr. Freeman collaborated with physicians at Indiana University to perform natural orifice transluminal endoscopy surgery, or “NOTES.”  Recognized internationally for her expertise in minimally invasive surgery, Dr. Freeman has been invited to speak abroad on numerous occasions.  She also collaborated with Purdue biomedical engineers to study the effects of mechanically active bandages and other compounds that promote wound healing.  Dr. Freeman’s honors include receiving the Pfizer Award for Excellence in Research and being recognized as an American College of Veterinary Surgeons founding fellow in minimally invasive surgery.  She was promoted to full professor this past year.

Dr. Scott-Moncrieff went on to explain how Dr. Freeman also has been heavily involved in teaching and engagement during her Purdue tenure. She implemented organizational changes in third-year surgery courses that had a documented positive impact on student learning, Dr. Scott-Moncreiff noted.  Additionally, she led the development and implementation of the Priority 4 Paws service learning initiative.  Launched in 2012, Priority 4 Paws features a mobile surgery unit that travels to partnering animal shelters within a day’s drive of the Purdue campus to spay and neuter shelter dogs and cats so that they can be adopted more quickly. The program not only has helped the animal shelters, but also has expanded educational opportunities for fourth-year veterinary students who take part in an elective rotation in shelter medicine and surgery. 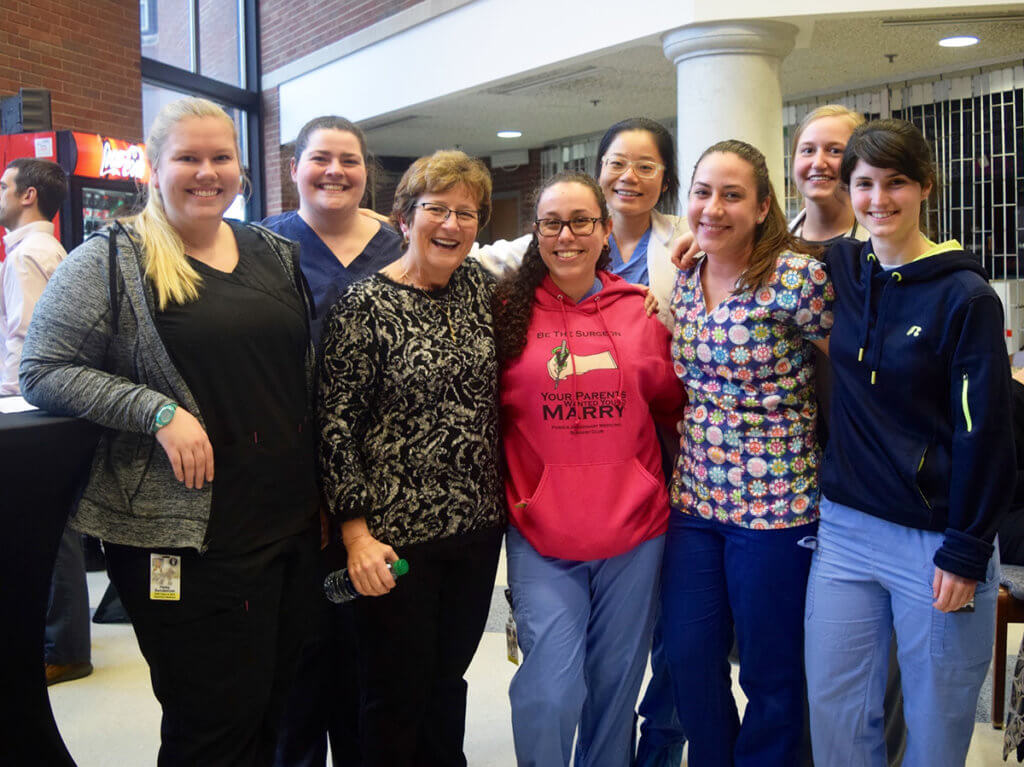 Dr. Lynetta Freeman is surrounded by student well-wishers at her retirement reception.

Dr. Scott-Moncrieff praised Dr. Freeman for having a major impact on the learning of PVM students as well as for her work to document the scholarship involved in the Priority 4 Paws program, for which she received the PVM Scholarship of Engagement Award in 2017.  “We’re really going to miss you,” Dr. Scott Moncrieff told Dr. Freeman. “You’re an energetic and engaging person.  You always have enthusiasm for whatever you’re doing and I’ve really appreciated working with you since you joined us in 2006.”

Other faculty and staff members also shared comments, including Dr. Freeman’s colleague, Professor of Small Animal Surgery Gert Breur, who emphasized that many small animal surgery residents learned endoscopic surgery from her since, for a number of years, she was the only one in the small animal surgery section with that skill set.  “She did endoscopic surgery when it wasn’t that popular yet,” Dr. Breur commented.

Then Dr. Breur introduced a surprise guest, who joined the event via a teleconference call, much to Dr. Freeman’s surprise.  Dr. Betsy Swanson, a previous resident who she had advised, thanked her for her support during the ups and downs of her residency.  “You were guiding and supporting at the low points, and cheering at the high points,” said Dr. Swanson, who now is assistant professor of small animal surgery at Mississippi State University.  “You are so much more than your career accomplishments and academic credentials,” Dr. Swanson said.   “Anybody who has ever known you and worked with you recognizes your spirit, your determination, your enthusiasm and energy, and most of all your warm personality and wide open arms of friendship that you offer to everybody.”

As part of the ceremony, Dr. Freeman received a commemorative gift with an engraving of the Continuum sculpture.  Dean Reed also read a letter from the Purdue Provost announcing her new designation as professor emeritus of small animal surgery and biomedical engineering.