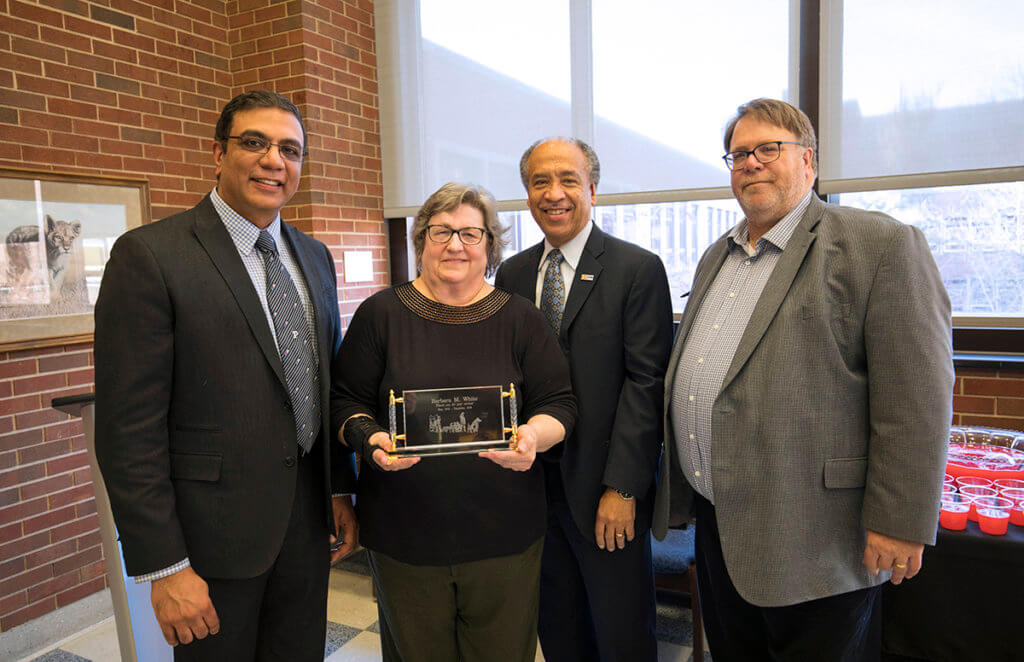 Colleagues, friends, and family gathered in the Continuum Café December 19 to recognize Barbara White, graduate program coordinator and administrative assistant in the Department of Comparative Pathobiology, on her retirement.  Dean Willie Reed and Comparative Pathobiology Department Head Sanjeev Narayanan congratulated Barbara, who received a glass etching of the Continuum sculpture to commemorate the occasion.

Barbara earned her bachelor’s degree in liberal arts at Purdue in 1975, and worked briefly on the clerical staff in Electrical Engineering at Purdue before taking a clerical position with Sears.  She then returned to her Electrical Engineering position and continued working there until enrolling in a master’s program in education.  While back in school, she also worked in the residence halls, first as a counselor and then as a staff resident.  After earning her master’s in 1981, she accepted a position as a Purdue University residence hall administrator in August of that year.  In December 1988, Barbara left the residence halls and transferred to what was then called the Department of Veterinary Pathobiology in the College of Veterinary Medicine.

For Barbara, 2018 marked major milestones as she celebrated working 30 years in the same department, and 40 years at Purdue.  “I never had a desire to work anywhere else,” Barbara said.  “I do indeed bleed black and gold.  The Purdue Hymn is my favorite lullaby.”  And she says you likely will be able to find her come spring at a Purdue baseball game.  Congratulations Barbara!