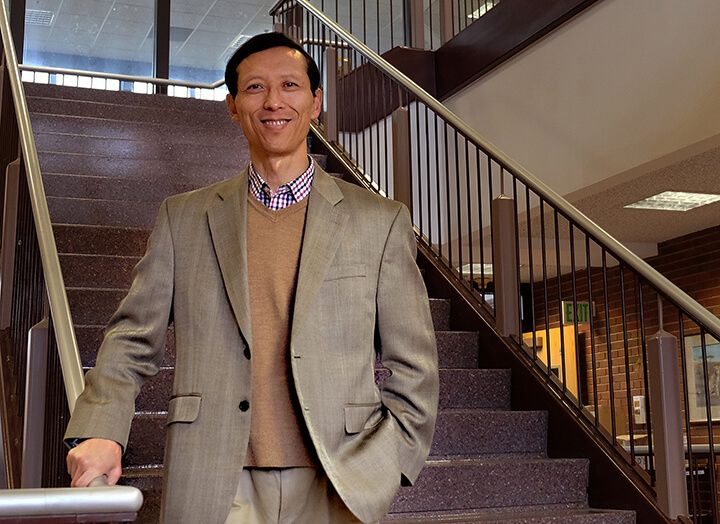 A Purdue Veterinary Medicine professor is leading studies showing a World War II chemical weapon antidote to be effective in combating a new enemy: Parkinson’s disease.  Recent research in the laboratory of Dr. Riyi Shi reveals that the antidote drug dimercaprol is effective at removing acrolein, a neurotoxin that is produced in the body after nerve cells are damaged and that is directly correlated with Parkinson’s disease. In addition, acrolein has been shown to increase pain and trigger a cascade of biochemical events postulated to intensify the severity of Parkinson’s and other neurodegenerative diseases.

Parkinson’s is characterized by the steady and progressive loss of brain cells. Those afflicted show early symptoms of trembling in their hands, arms, legs, jaw, and face. It can progress to the point where walking, talking, or completing the most basic tasks becomes a daily challenge. Half a million people in the U.S. are currently living with Parkinson’s disease, and another 50,000 people are diagnosed with this neurodegenerative disorder every year, according to the National Institutes of Health.

“Our studies show that by removing the toxin (acrolein) from the brain, we are not just reducing the symptoms of Parkinson’s disease, but also significantly reversing the damage of Parkinson’s disease,” said Dr. Shi, professor of neuroscience and biomedical engineering in the College of Veterinary Medicine’s Department of Basic Medical Sciences and the Weldon School of Biomedical Engineering. “This could actually provide a new treatment for Parkinson’s patients.” 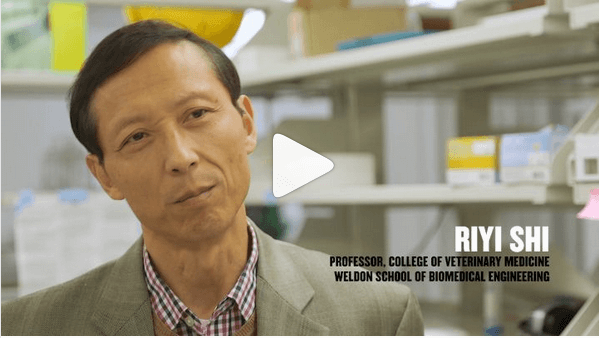 When administered systematically in the body, dimercaprol nullifies certain chemical features of acrolein, neutralizing and effectively eliminating it from the brain. Dr. Shi is moving forward the potential treatment, which has fewer side effects than other acrolein scavengers and involves safe, total removal via urinary excretion. The technology is patented through the Purdue Office of Technology Commercialization, and the innovation is available for licensing. Click here to view a video about the technology.

Dr. Shi’s laboratory already is demonstrating promising results using dimercaprol to remove acrolein in subject models of Parkinson’s disease. So far, these studies have revealed an increased survival rate of brain cells and a significant delay of the disease’s progress.

“We believe that the drug’s classification and method of administration are what make it an attractive therapy option. By systematically injecting the antidote drug directly into the abdominal cavity, it can be absorbed by the bloodstream and then travel to the brain, where the disease is most harmful and where the drug can most benefit the patient,” Dr. Shi said.

The research relates to a paper authored by Dr. Shi and doctoral student Ran Tian and published earlier this year in the Journal of Neurochemistry, which described how the chemical warfare antidote drug was shown to remove the neurotoxin in cell cultures, laboratory animals, and other experiments. The research was funded by the National Institutes of Health, the Indiana State Department of Health, and the Indiana CTSI Collaboration in Biomedical Translational Research Pilot Program.

Dr. Shi’s work aligns with Purdue’s Giant Leaps celebration, recognizing the University’s global advancements in health as part of Purdue’s 150th Anniversary. “Health and Longevity” is one of the four themes of the yearlong celebration’s Ideas Festival, designed to showcase Purdue as an intellectual center solving real-world issues.  The research also dovetails with the goals of a recently formed Purdue Institute for Integrative Neuroscience, at Purdue’s Discovery Park. The institute spans 25 departments and includes around 100 faculty engaged in neuroscience-related research.