The Purdue University College of Veterinary Medicine is pleased to have two faculty members, Dr. Sophie Lelièvre and Dr. Candace Croney, featured in the Executive Vice President for Research and Partnerships (EVPRP) 2016-2017 annual research report. The theme for the annual research report this year is Earth + Space. The report provides glimpses of Purdue’s role in expanding the frontiers of space and in delivering impactful research here on earth. 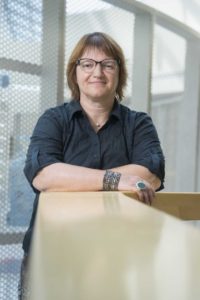 Dr. Lelièvre, professor of cancer pharmacology in the Department of Basic Medical Sciences, is highlighted for, as the report states, “…leading the charge in a new screening pipeline that focuses on epigenetics (the analysis of chemical changes on and around genes that are involved in gene expression control) to identify environmental factors with epigenetic impact.” The report goes on to quote Dr. Lelièvre as explaining, “Many life-impacting chronic diseases such as neurodegenerative disorders and cancers are influenced by epigenetic changes.”  Dr. Lelièvre’s biobank focuses on environmental factors like certain plants and fungi that might have protective effects, documenting the positive health impacts that local specimens have had on regions all over the world.  Since scientists are unable to test the bioactive ingredients that cause the beneficial effects directly on humans, Dr. Lelièvre identifies and tests the suspected bioactive ingredients in an “organ-on-a-chip,” a 3-D cell culture. “The beauty of the organ-on-a-chip model system is that it can ultimately be used with cells obtained from human populations of different origins, enabling an understanding of how natural compounds of medicinal plants and other natural species might work better in some populations than in others,” Dr. Lelièvre is quoted as saying. 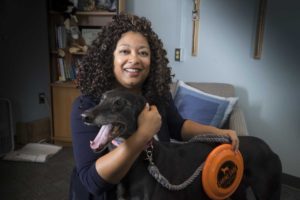 Dr. Candace Croney, professor of animal behavior and well-being in the Department of Comparative Pathobiology and director of the Purdue University Center for Animal Welfare Science, is featured in the report for the development of Canine Care Certified, a national, voluntary certification program she spearheaded that sets rigorous standards for professional dog breeders. The certification program addresses physical health, environment, behavioral health, breeding life, and caretaker expectations. According to Dr. Croney, USDA licensed commercial breeders have to follow certain key regulations, but other breeders wanted further guidance on caring for their animals, and that’s where Canine Care Certified comes in. “If people are going to be buying dogs, we ought to figure out a way to protect those dogs as much as possible, while also not sending the message that there’s something wrong with getting shelter dogs,” Dr. Croney is quoted as saying.