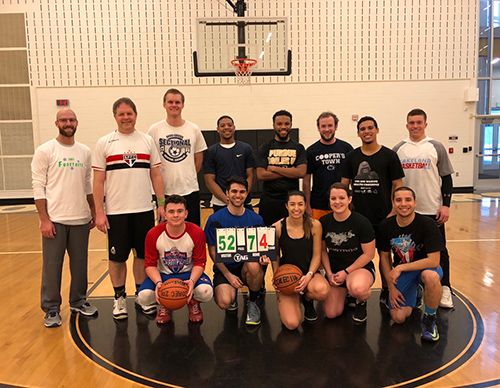 Members of the PVM faculty/staff team join students from the DVM classes of 2018 and 2019 for a group photo at the Purdue SAVMA Basketball Contest.

The Super Bowl wasn’t the only epic sporting event held Sunday, February 4. That also was the day for the Purdue SAVMA Basketball Contest pitting faculty and staff against students. The event was held at the France A. Córdova Recreational Sports Center (Co-Rec).

The first basketball game matched the faculty and staff against the DVM Classes of 2020 and 2021. Initially the faculty were able to keep it close, but several baskets at the end of the first half saw the student lead blossom to 26-15. Early baskets from the faculty in the second half brought the students’ lead back to single digits a couple of times, but without many subs to preserve the energy of the faculty team, the students pushed the tempo and scored numerous easy fast break points to increase their lead. Despite the faculty and staff racking-up 19 points in the second half, defense suffered and the students cruised to a final score of 63-34. (If you’re faculty, just pretend that’s a typo…).

A slight miscommunication on time resulted in the second game starting a bit early with only four against four in the half court. Without the threat of fast break opportunities, the faculty settled in and managed to keep up their productivity on offense, ending the half with a 26-24 lead over the DVM Classes of 2018 and 2019. Despite fatigue (can you sense a theme here?), the faculty succeeded in scoring more points than in their previous two halves.

Unfortunately for the faculty, the remainder of the students’ classmates showed up in time for the second half and the game returned to exhaustive full court five-against-five competition, without the faculty/staff having any subs and playing their fourth consecutive half (cue sad music background). The students, in contrast, had fresh energy and “Boiler-upped” the pace, getting lots of easy baskets. Even when they had to slow their “Hammer Down,” numerous student players found their three-point range and scored killer buckets from distance. Even though the faculty again had 26 points in the half, they ultimately were overcome by the students’ huge scoring outburst, which resulted in another blowout, with a final score of 74-52.

Both student teams shared the ball well and all the ladies participating got into the scoring column. Special commendation is in order for the rugged members of the faculty/staff team who gutted it out in the face of the grueling competition, including Drs. Steve Thompson, Craig Thompson, Blake Marcum (oncology resident), and Ken Brand (small animal surgery resident). Special thanks to Purdue SAVMA for helping support the facility rentals that make these sports competitions possible.

The students improved their overall record to 6-1 over the faculty/staff teams (no game occurred last year – and even so all of the current classes now have 1-0 records). Congrats to the students – and faculty and staff know to stick to their day jobs.