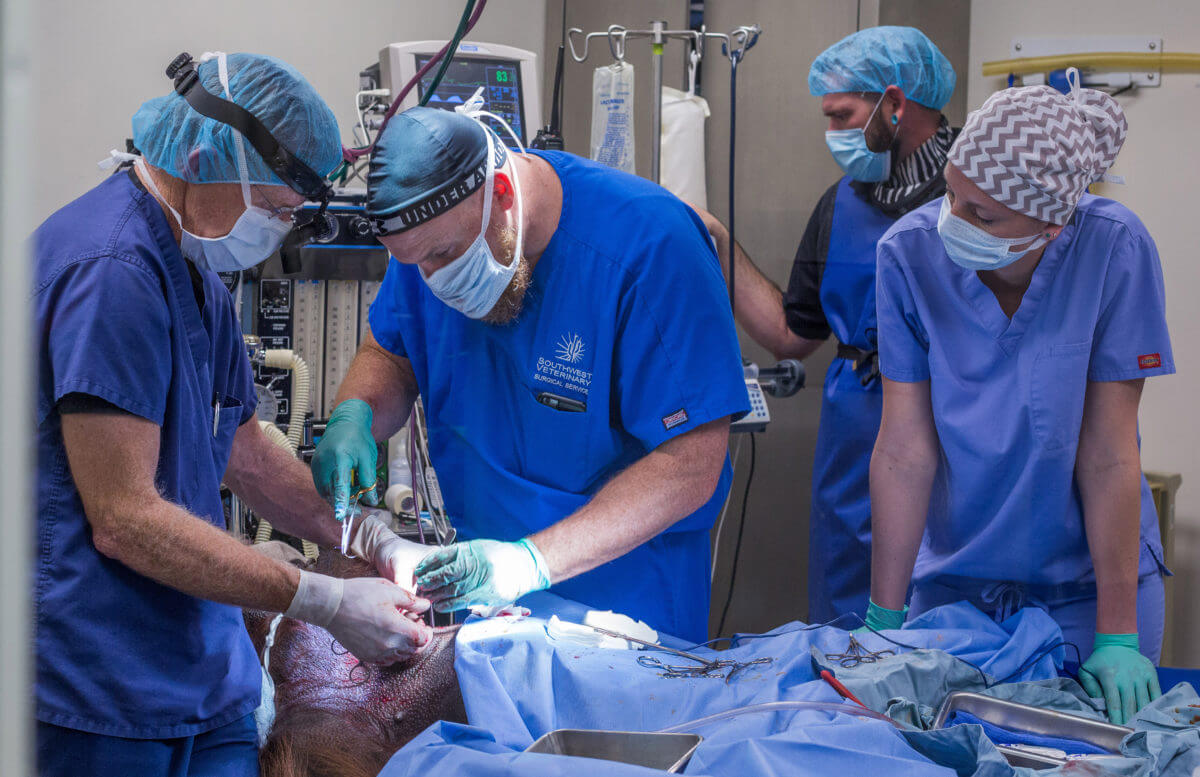 Daniel, a 12-year-old Bornean orangutan at the Phoenix Zoo, underwent a life-saving operation with the help of Purdue University College of Veterinary Medicine graduate Jeff Steurer (PU DVM 2007). Dr. Steurer is a board-certified surgeon at the Southwest Veterinary Surgical Service in Arizona and has performed surgery on Daniel in the past to remove infections in his air sacs, hoping to fix his sinusitis. Nevertheless, the infections returned. Respiratory disease is a common health issue for orangutans. It is multi-factorial, but often starts with a sinus infection. 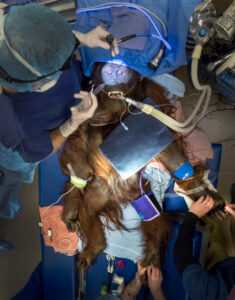 Aerial view of the surgery performed on Daniel the Orangutan that lives at the Phoenix Zoo and suffered from recurring sinusitis with air sacculitis, a common disease in orangutans. A PVM alumnus, Dr. Jeff Steurer, and a “people” doctor, David Simms, M.D., an ear, nose, and throat specialist, performed a successful surgical procedure that will greatly increase Daniel’s chances of a complete resolution of his chronic respiratory issues. (Photo courtesy of the Phoenix Zoo)

Once Daniel’s sinus infections returned, the Arizona Center for Nature Conservation (ACNC), which operates the Phoenix Zoo, decided to try something new. A team of ACNC veterinarians worked with Dr. Steurer and David Simms, M.D., an ear, nose, and throat surgeon from Arizona Otolaryngology Consultants, to treat Daniel for sinusitis and air sacculitis. The team was able to create a life-size replica of Daniel’s skull with a 3-D printer prior to the surgery to use as a guide which led to an extremely successful surgery.

“Due to the nature of Daniel’s sinusitis, the infection returned, and he was showing signs of labored breathing, coughing, a distended air sac, and frequent mucous production,” said Dr. Steurer. “This second time around, we performed a marsupialization of the air sac, creating a permanent opening to help prevent reinfection.  It may look a little odd and unsettling, but the end result will allow for continued drainage, thus preventing the buildup of the purulent material and the respiratory signs that are associated with it.”

Daniel is now back in his exhibit, monkeying around. He is the first orangutan to have undergone endoscopic surgery in the United States. According to a statement from the Phoenix Zoo, previously the surgery only had been performed on an orangutan in the UK and Switzerland, but no long-term follow-up was ever recorded.

Dr.  Steurer earned his Purdue DVM degree in 2007 and after a small animal medicine and surgery internship at Mississippi State University, he returned to Purdue to complete his surgical residency training.  He finished his residency program in 2011 and earned diplomate status with the American College of Veterinary Surgeons in 2012, after moving to Arizona to join Southwest Veterinary Surgical Service.