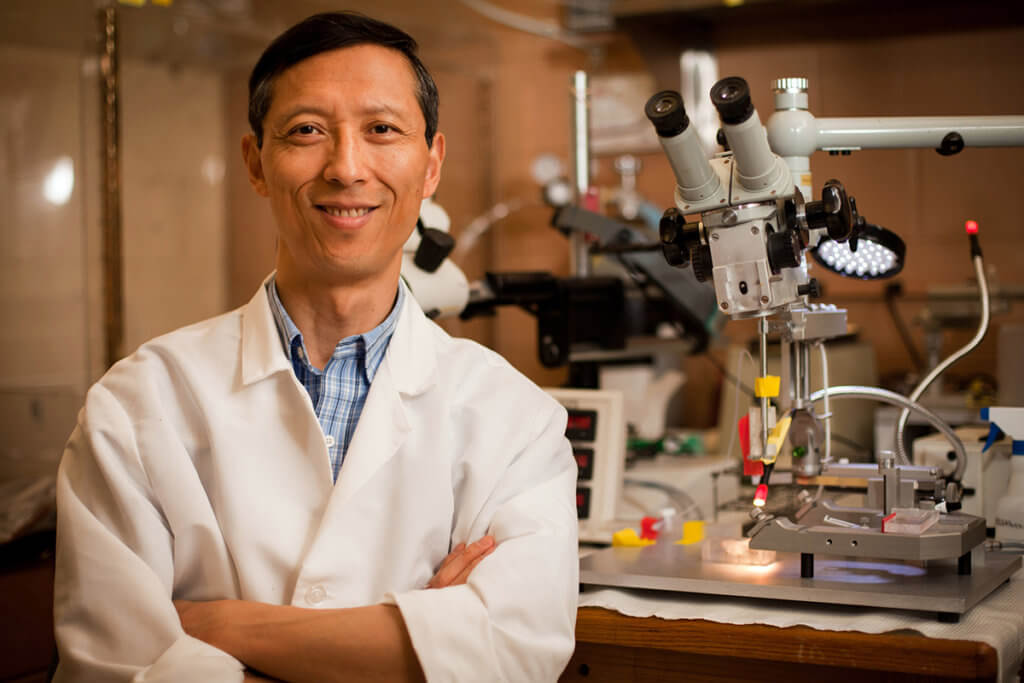 A potential new drug therapy for spinal cord injuries has been identified by a research team led by Dr. Riyi Shi, a professor with a joint appointment in the College of Veterinary Medicine’s Department of Basic Medical Sciences and the Weldon School of Biomedical Engineering. The drug works in a similar way as a medicine previously developed at Purdue, 4-aminopyridine, which has been approved by the U.S. Food and Drug Administration to treat multiple sclerosis. (Purdue University photo)

Research led by a Purdue Veterinary Medicine scholar shows that an experimental drug has promise as a potential therapy for spinal cord injuries in animal studies.  The compound, 4-aminopyridine-3-methanol, works in a similar way as a drug previously developed at Purdue, 4-aminopyridine (4-AP), which has been approved by the U.S. Food and Drug Administration to treat multiple sclerosis.

Dr. Riyi Shi, who holds a joint appointment as professor in Purdue Veterinary Medicine’s Department of Basic Medical Sciences, and in the Weldon School of Biomedical Engineering, was involved in the development of both drugs, and compared the two compounds in both cell cultures and animal models.  “For the first time, 4-aminopyridine-3-methanol is shown to restore function in chronic spinal cord injuries,” Dr. Shi says. “It also reduces neuropathic pain to a greater degree than 4-AP.

Dr. Shi further explains, “Because persistent chronic pain is a serious problem among patients with spinal cord injuries, 4-aminopyridine-3-methanol could potentially be used to reduce pain, independent of any motor benefits.”  He says an advantage of this drug is its broad therapeutic dosing range. “The minimum effective dose can be as low as 10 times less than 4-AP, but it can also be applied at a level that is five times as high.”

In spinal injuries even if the nerve fibers of the spinal cord itself, the axons, are intact, function can still be lost if there is damage to the fatty coating on the outside of nerve fibers, which is called the myelin sheath. When the myelin sheath is damaged, potassium channels underneath the coating open, disrupting the electrical signal. Both drugs work by closing these channels to restore the conduction of the axons.

“We are very encouraged by this preclinical study because about 10 years ago 4-AP, which is marketed as fampridine, dalfampridine, or Ampyra, was approved for MS, and both spinal cord injuries and MS share a similar mechanism of nerve signal conduction loss; they both could be caused by myelin damage,” Dr. Shi says. “The drug was approved for MS but not approved for spinal cord injuries because of concerns about potential toxicity and a narrow therapeutic dose range. So there is a big need for a better channel blocker.”

Dr. Shi and his team found that 4-aminopyridine-3-methanol is safer, more effective at closing the potassium channels — at least 50 percent more effective — and also much longer lasting.  The research is published in the May Journal of Neurotrauma, and was funded by the National Institutes of Health; the state of Indiana; the Science and Technology Commission of Shanghai Municipality, Shanghai, China; and grants from the Shanghai Bureau of Health, Shanghai, China.

Click here to view a complete news release about the research.