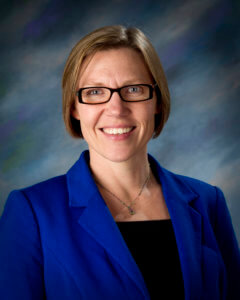 A Purdue Veterinary Medicine One Health expert called for better communication between physicians and veterinarians about zoonotic diseases during a lecture at the 2018 American Veterinary Medical Association (AVMA) Convention.  Dr. Audrey Ruple, assistant professor of one health epidemiology in the Department of Comparative Pathobiology, gave a presentation on what physicians know about zoonotic diseases, which was covered in an article published by the American Veterinarian.  In the story, the author, Dr. Nicola Parry, reports on Dr. Ruple’s explanation of why and how physicians and veterinarians need to join forces to improve management of zoonotic diseases in people and animals.

The AVMA annual convention was held July 13-17 in Denver, Colo.  According to the article, Dr. Ruple shared information during her presentation about studies that have shown how people in communities lack knowledge about zoonotic diseases. Surveys of the general public regarding zoonotic diseases in dogs indicated that only 85% would seek emergency medical help if they thought they had been exposed to rabies and less than 60% were aware that untreated rabies can be fatal.  When questioned about where they obtained information about these diseases, just under 50% cited the media and internet, 35% said they asked veterinarians and just six percent asked physicians.

The article went on to spotlight factors that Dr. Ruple identified which contribute to the shortfall in physicians’ knowledge of zoonotic diseases.  For example, she pointed to differing accreditation standards between veterinary and medical schools.  She emphasized that one of the accreditation standards for veterinary schools has public health significance because it indicates the need for schools to provide education about zoonotic disease.  However, she said, no such public health–related standard exists for accreditation of medical schools.